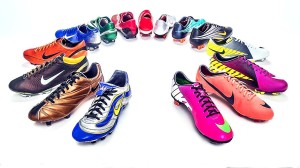 With footy season well and truly started it is important to ensure you and your children are wearing the correct football boots. The correct boot will reduce injury and increase performance. What to look for:

A lot of research goes into developing the optimal combination of materials for the upper.
There are those which enable the player to add spin to the ball and those that incorporate chemical coatings to provide additional grip.
It needs to be strong enough to support your foot during rapid changes in direction and when kicking.
Synthetic is generally lighter weight and cheaper but some players complain that these boots get water logged and have less breathability and that the boot doesn’t mould to the foot as well.
Kangaroo leather on the other hand is popular due to its strength and ability to mould well to the foot, whilst remaining relatively light. However, it is generally more expensive costing over $200.
Examples include Asics Lethal which is a combination between leather and synthetic or the Tigreoir which is Kangaroo leather which will feel tight initially (therefore no good for wide feet) but will stretch so moulds well in longer term.
A Good general rule is if you spend $170 and upwards, your paying for better quality of upper.

The heel counter or heel cup needs to be very rigid to support your rear foot during swerving & stepping.
A sturdy deep heel cup can prevent injuries especially in young footballers and is good at preventing the rolling inwards of the heel which causes a lot of foot pain/injury that I see.

Many boots today have midsoles or wedges under the heel and even into the forefoot much like a touch football boot.
A boot with a midsole provides cushioning and support which is desirable for injury prevention. These are particularly good for young footballers that suffer from heel pain or ‘severs’(inflammation of the growth plate) or any player that suffers from lower limb injuries like shin splints, Achilles tendonitis or chronic knee pain.
The extra bulk in this type of boot is the only downside and serious players often prefer to use them for training only while staying with the traditional style boot for game day.

Often Nike and Adidas will have a flat midsole, while Asics will tend to have a heel lift. The Asics Lethal range is similar to a running shoe and has a lot of medial arch support
Asics Gel Lethal Ultimate is a good boot for those with foot pain but it is above $200 and once again serious football players will tend to find this boot quite heavy.

The outsole must be rigid and match the width of the foot.
A narrow outsole will cause the foot to hang over the edge of the sole and place more pressure on the upper which then decreases the stability of the boot.
The outsole should only flex at the forefoot in the position that the toes bend, all other movement in the outsole should be minimal.

All football codes in Queensland are generally played on very hard surfaces, therefore, a moulded boot is far more suitable and a lot safer.
It is important to make sure there are no studs positioned directly under the big toe joint and that the studs do not stop the boot flexing where it is supposed to – under the ball of the foot.
A cleat system is advantageous because it will provide greater grip without increasing the weight of the boot.
Anyone who has had a knee reconstruction or suffers from instability in the knee joint should be careful not to use an aggressive cleat design as the increased grip may cause the foot to remain stuck in the turf whilst the upper leg rotates, potentially leading to excessive twisting through the knee.

Nike and Adidas will often do a round configuration with 6 or 7 studs. Asics often do 10 in a blades studs combo, this is good for sensitive feet and more studs are better for harder grounds like in QLD.
Screw ins we don’t see as much these days but some footwear stores can order an Asics boot with a combo of screw in and mould studs.

Considerations
In summary a correctly fitted boot is an important factor in prevention and treatment of foot injuries.
Everybody’s feet are different and there is no one great boot or brand.
Generally the boot should feel comfortable and be position, sport, and conditions specific.
Consider what studs and where they are located. Will you have enough grip and turning traction?
Is the boot light, rigid from heel to the ball of foot and flex at its widest point?

Podiatrist
Wade, our friendly Podiatrist can help you out with all of this information as well as assessing your foot type, gait and foot function.
Its always a good idea to bring your new boots in to the clinic unworn and show Wade so he can check for fit first in case they need to be returned.
Call 5504 7000 for more information or to make an appointment